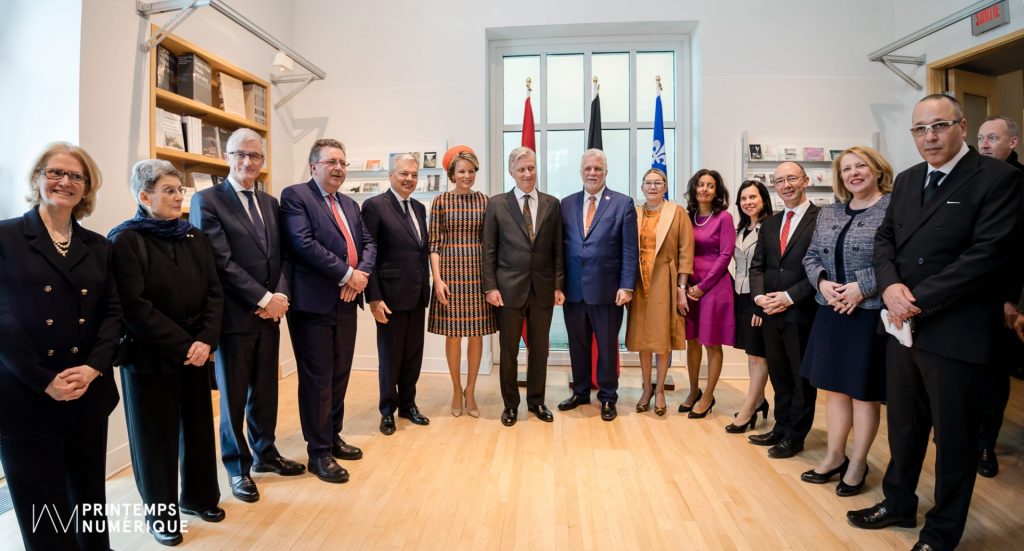 On March 15, 2018, Montreal Digital Spring launched its new season among very special guests! Their Majesties the King and the Queen of the Belgians, along with numerous Belgian dignitaries, including the Minister-President of the Government of the Brussels-Capital Region Rudi Vervoort, Quebec Premier Philippe Couillard, Ministers Dominique Anglade and Christine St-Pierre, as well as the Mayor of Montreal, Valérie Plante, attended the #intersections VOL.7 conference on the theme of algorithmic governance.

In front of a full theater at the Canadian Centre for Architecture, Professor Hugues Bersini, member of the Royal Academy of Belgium, Professor at the Université Libre de Bruxelles and co-director of the IRIDIA laboratory opened the event with a conference on this ‘benevolent’ Big Brother to whom we slowly accept to entrust the future of our societies. Following the conference, Jane Murphy, lawyer and co-founder of the European Data Protection Office, Gilles de Saint-Exupéry, lawyer and Lex Start partner, Éric Rodriguez, co-founder of lex.be and Jonathan Berte, CEO of Robovision, joined the discussion for a panel moderated by the journalist Catherine Mathys.

This event bridges the gap between the digital hubs of Montreal and those of the European capital. “This evening is a strong manifestation of the relationship we have been building between Quebec and Belgium, especially in the digital sector, said Suzanne Gouin, Chair of the Board of Directors of Montreal Digital Spring. We are pleased to contribute to strengthen these ties when, even thousands of miles away, our passion for the digital brings us together.”

“When I talk about the province of Quebec abroad, I am only talking about one thing: talent, said Quebec Premier Philippe Couillard. The talent that allows us to build the future, to invent technologies, to think collectively and to build international connections. The whole world is in competition, yes for the data – Data is the new gold -, but also for talents. Everyone knows now that Montreal is one the most important AI hub with IVADO, SCALE.AI, MILA, and Montreal Digital Spring. This does not happen randomly, this is the result of many years of methodical work (…).”

Montreal Digital Spring, a symbol of Montreal’s great digital creativity scene, runs until June 21.”In just five years, Montreal Digital Spring has become a major event on the metropolitan scene,” said Valérie Plante, Mayor of Montréal. The City of Montréal is proud to support this event once again, which fosters the development of emerging and innovative digital practices. Montreal Digital Spring also strengthens Montreal’s position as the world capital for digital creativity. The theme of artificial intelligence that we have addressed during the #intersections conference is even more relevant as Montreal is today a global hub in this vibrant economic sector.”

“Progress is a good thing in itself, it is necessary, it is indispensable. However, as Hugues Bersini said, if public authorities are not taking an active role in monitoring this progress, we must fear the abuses. Progress has neither moral nor judgment, it is only depending on how we are going to use it that will make it useful, or not, for the evolution of our society”, added Minister-President of the Government of the Brussels-Capital Region, Rudi Vervoort.

Mehdi Benboubakeur, Executive Director of Montreal Digital Spring, invites all Montrealers and visitors to take part in the 5th season of Printemps numérique, which brings together over 200 partners. “This season is definitely about artificial intelligence! We want to harness the full potential of these technologies, especially since Montréal is a major hub for its development. Our elected officials and the general public must be aware of the ethical, socio-economic and philosophical issues related to the deployment of AI. These discussions are far from being over!”

Let’s not forget that Montreal has recently been selected to become the headquarter of the AI-Powered Supply Chain Supercluster. The economic impact of this project amounts to more than $16.5 billion and more than 16,000 jobs should be created over the next 10 years. (source: City of Montréal).

Watch Minister-President of the Government of the Brussels-Capital Region, Rudi Vervoort, full speech:

Watch Suzanne Gouin, Chair of the Board of Directors of Montreal Digital Spring, full speech:

Watch Hugues Bersini, member of the Royal Academy of Belgium, Professor at the Université Libre de Bruxelles and co-director of the IRIDIA laboratory, full conference:

Watch the discussion panel: Algorithmic Governance – Are we about to entrust our societies with machines and algorithms?

Montreal Digital Spring, produced in association with the Journal Métro, has received $225,000 in financial support from the City of Montréal in 2018. The Secrétariat à la région métropolitaine also grants the Printemps numérique $75,000 from the Metropolis. This project is also supported by Concertation Montréal, Montreal Tourism, and La Vitrine.

Montreal Digital Spring (Printemps numérique) is a non-profit organization whose primary mission is to boost digital creation and creativity through various activities of event productions, communication, curation, networking, and mediation.

Since 2014, its flagship event – the Printemps numérique (digital spring) – is held annually in Montreal from March 21 to June 21. This season is both a space for networking between the arts, industry, education and research sectors and a showcase of their productions. The diverse programming of Montreal Digital Spring makes digital arts more accessible to a larger audience while attracting an international clientele.

Throughout the year, the organization is establishing itself in the various digital sectors by organizing forums and events that foster conversations around digital trends and issues of digital transformations.